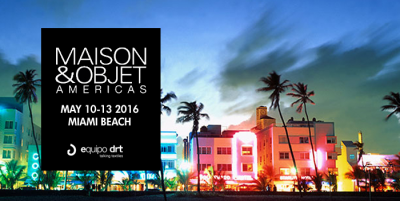 Equipo DRT focuses on the US market: MAISON&OBJET AMERICAS 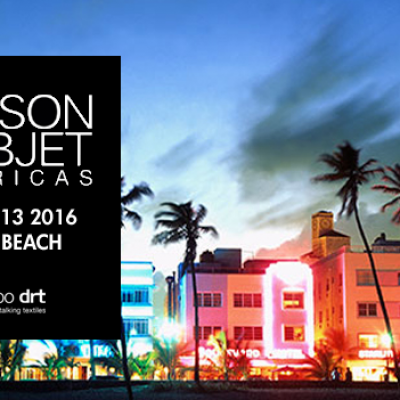 The textile editor takes another step forward in its internationalisation process by participating at the second edition of MAISON&OBJET AMERICAS, from 10 to 13 May in Miami Beach.

This business platform will convert Miami into a hub for international design on the American continents. Four days during which some 500 exhibitors will be congregating at the Miami Beach Convention Center for the second edition of MAISON&OBJET AMERICAS. From 10 to 13 May, this international decoration and interior design show kicks off for the whole world, and Equipo DRT will be exhibiting here for the first time.

«It will be an event for both our customers in the United States and for new accounts in countries like Mexico, Panama, Peru, Colombia and Brazil, among others. For our company it is a firm bid for expansion in these markets with the aim of establishing a stable, long-term marketing network for decoration and interior design projects for the home and hoteliering trades, with the participation of today’s best architects and interior designers in the world,» states Arantxa Porter, marketing manager for the textile editor Equipo DRT.

Backed by the prestige of Maison&Objet, which is so well known in the international design field, this event will enable the company «to open the gates for working on the other side of the Atlantic, and all around the world, as design teams are increasingly internationalised, thanks to both the profiles of each team and the mobility with which we operate today in trade,” adds Porter.

In addition, this second edition of MAISON&OBJET AMERICAS will be featuring a series of outstanding personages, such as Rafael de Cárdenas, named a Featured Designer for AD France Collector and to the Architectural Digest AD100 list, with whose London team Equipo DRT worked last year on an interior design project.

But Miami is not the only venue for Equipo DRT‘s trip to «the Americas». The textile firm will be visiting New York two days after Miami to attend ICFF 2016, the International Contemporary Furniture Fair in New York, where Equipo DRT will be meeting with clients and designers with whom interior design projects are being undertaken in the United States, exchanging experiences and sharing trends in the trade, and forging new links to shorten the distance between Europe and the Americas.